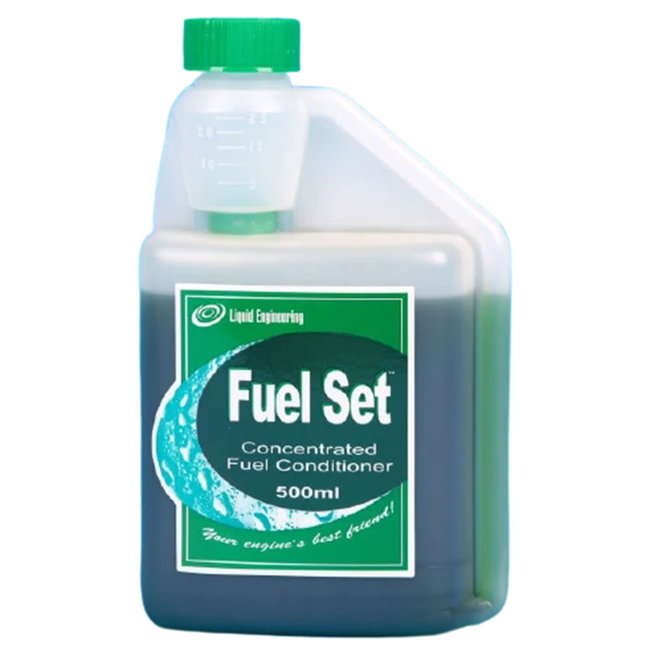 Fuel Set FCC is a complete fuel conditioner providing comprehensive protection of the fuel system, which in turn reduces running and maintenance costs. It is a non-hydrocarbon, non-toxic, non-flammable formula that absorbs the water present in fuel, enabling it to pass through the combustion process in a pure combustible state. No more rough spots or misfiring. Fuel Set FCC also dissolves sticky contaminants (waxes, gums and varnishes) from injectors and carburettors and helps remove carbon deposits. This keeps the fuel system operating at peak efficiency, resulting in cleaner exhaust emissions, improved fuel economies and smoother running.

-Prolongs the life of catalytic converters and stops the smell

Water also reacts with chemicals in fuel at the point of combustion, which causes gums, resins and contaminants to separate and foul fuel systems, especially injectors. Absorbing the water into the fuel/Fuel Set mixture allows any water to be burnt off harmlessly into the atmosphere.

When used in an economical 4000:1 mix ratio, Fuel Set will maintain clean and sterile conditions throughout the fuel system.

A bit of background...

Blocked filters, stuck injectors, internal corrosion, reduced horsepower and even engine failure can be caused by a microscopic fungus, Cladisporium Resinae, that is present to varying extents in all fuel oil. This fungus commonly known as the 'bug', thrives in fuel storage tanks, using the hydrocarbons in the fuel as a food source and dissolved oxygen in any water for respiration.

The air space above the fuel in a storage tank contains water vapour, which condenses on the surfaces of the cool walls and subsequently sinks to the bottom of the tank where it collects. The fuel/water interface contains both hydrocarbons and dissolved oxygen which provides the ideal environment for the 'bug', with each fungal cell dividing every twenty minutes. As the older fungi die their bodies accumulate, forming a slime that ultimately floats upwards into the fuel. From here the sludge is drawn into the engine, quickly clogging filters and narrowing fuel lines. But the damage does not stop there. A portion of the sludge adheres to the inner wall of the tank and fuel lines, producing corrosive Hydrogen Sulphide that causes metal defects and pitting to the injectors and fuel related components.

Biocidal treatment will kill any bacterial growth but creates a sudden mass of dead cells, which only adds to the problem. Also, biocides are generally poisonous and have to be handled with great care. On a more important note, they do not remove the water.

Fuel Set FCC is the solution to this problem. When added to your fuel, this conditioner totally absorbs the water from the fuel system, thereby removing the environment where the bug lives. Any fungi present not only suffocate and die but are dissolved in the treated fuel, passing through the filters to be burned off harmlessly. The 'bug' cannot re-infest when Fuel Set FCC is present in your fuel.