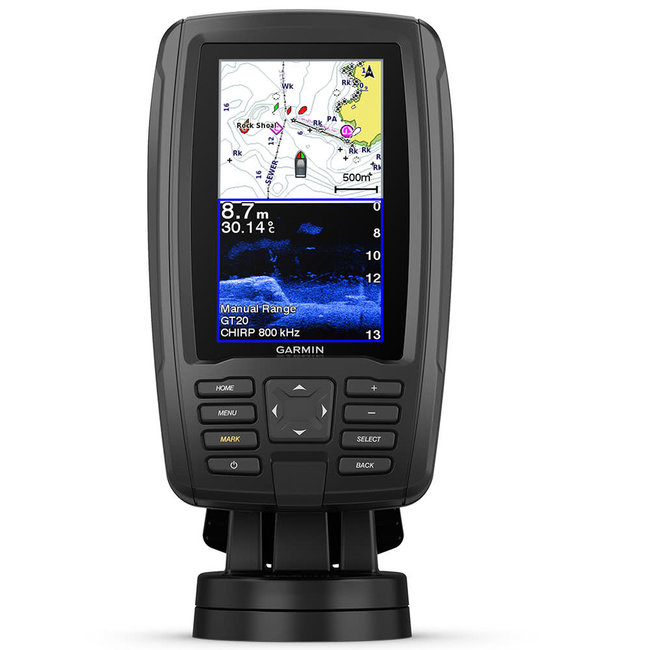 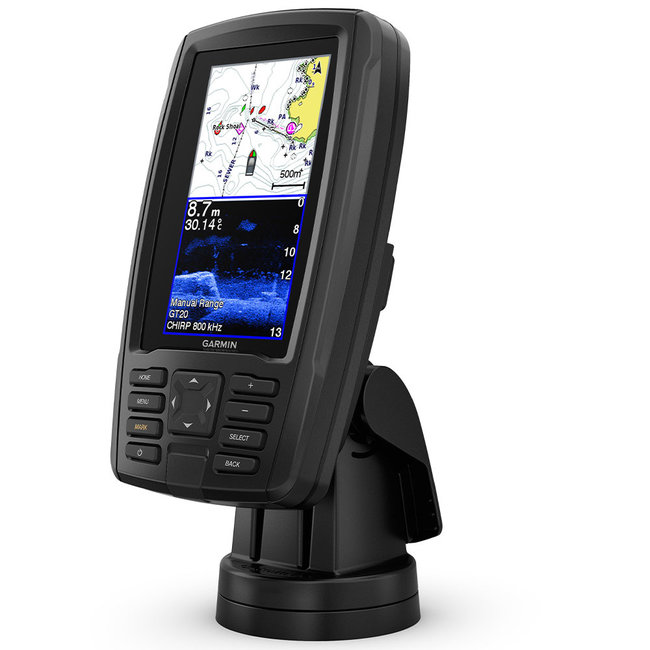 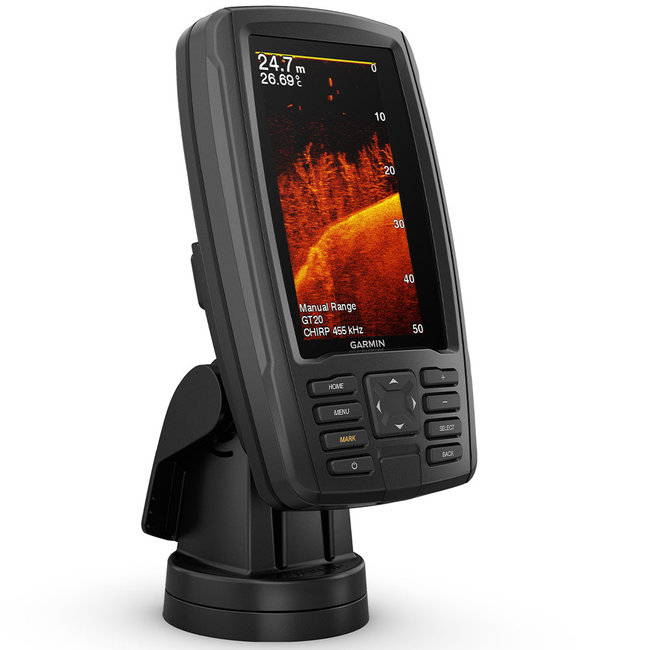 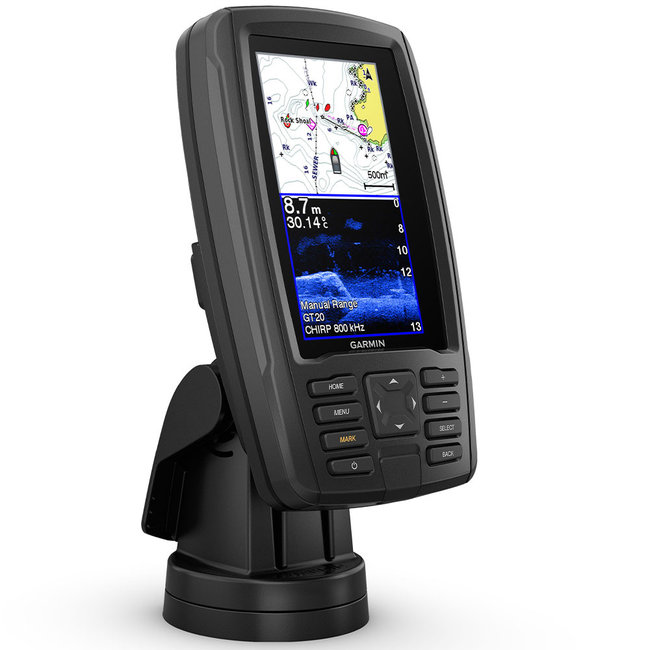 It's time you started fishing with the power of CHIRP sonar. The easy-to-install, easy-to-use 4.3" echoMAP CHIRP 45dv is compatible with optional transducers for high wide CHIRP sonar and Garmin CHIRP DownVü, the clearest scanning sonar on the water. It Includes Quickdraw Contours software to instantly create your very own HD maps with 30 centimetre contours as you fish. Internal 5 Hz GPS updates position and heading 5 times per second. Cables plug directly into the mount, allowing you to quickly install and remove your device from power and mount. Transom and trolling motor mounts included.

The Garmin CHIRP Difference:
The built-in sonar capabilities of echoMAP 45dv include CHIRP sonar, the most sophisticated sonar technology available for the fishing and boating public. CHIRP sonar provides amazingly clear target separation and definition because it puts even more energy onto the target than traditional sonar. It also includes sonar-recording capability that coordinates the timing of the sonar return with your boat's position and saves digital information for playback on a computer using HomePort™ planning software. Use the user data sharing cable to share waypoints and routes between multiple devices.

Clearest Scanning Sonar on the Water:
Garmin DownVü scanning sonar give you a nearly photographic image down to 225 metres below your boat. You clearly see structure, submerged objects and fish. Traditional Garmin HD-ID™ sonar and DownVü scanning sonar are combined into 1 transducer. Also provides HD-ID support for Minn Kota® and MotorGuide® trolling motors with integrated transducers.

Preloaded UK, Ireland and North West mainland Europe coast maps:
Preloaded with Garmin's highly detailed BlueChart G2 mapping covering the British Isles in their entirety, including the Thames Estuary, Caledonian Canal, Outer Hebrides, Shetland and Orkney Islands, Isle of Wight, Isle of Man, Lough Neagh, The Shannon river (up to Lough Kee) and the Irish Sea. Continental coverage from Brest, FR to Kiel, DE including the Channel Islands, the Waddenzee, the IJsselmeer, the canals of The Netherlands, the Meuse River to Liege, BE; the Rhine River to Dusseldorf, DE and the Kiel Canal.

Create Your Own HD Maps:
Quickdraw Contours is a free, easy-to-use software feature already installed on your echoMAP CHIRP 45dv. It instantly creates your own personalised HD fishing maps on screen with 30 centimetre contours. Tailor the maps as needed; you own them. Keep the data for yourself, or share it with Garmin or your friends. No special surveying expertise is required. You just fish while Quickdraw Contours creates maps. There's no waiting around or sending your files away like other mapping software requires - your results appear instantly. Use with any Garmin Panoptix™ transducer, any HD-ID sonar, any CHIRP-enabled, Garmin DownVü transducer or NMEA 2000®-compatible depth transducer. Have more than 1 sonar device installed onboard? Quickdraw Contours automatically selects the most capable sonar device to provide the very best results for you.

Heading and Position Refreshed 5 Times per Second:
Fast, responsive 5 Hz GPS/GLONASS refreshes your position and heading 5 times each second to make your movement on the screen more fluid. Now it's quick and easy to drop up to 5,000 accurate waypoints and find your way back to your secret fishing hot spots.

Multiple Depth Range Shading:
Designate up to 10 different depth ranges each with its own colour. Makes it easier to view target depths at a glance.

Take Your echoMAP with You:
When you're off the water, it's easy to keep your echoMAP safe and secure. You don't have to mess with plugging and unplugging wires from the unit because the cables plug directly into the mount. This allows you to quickly install and remove your echoMAP from power and the mount.

Upgrade with the Best Garmin Maps on the Water:
A single microSD™ card slot provides expandable memory for accessory map purchases such as BlueChart® g2 or BlueChart® g2 Vision®. Based on your boat's specifications, Auto Guidance instantly creates a visual path you can follow to avoid shallow water and other charted obstructions.